Great training aids in hockey are a rare commodity so Crazy Catch, the Ultimate Rebound Net, really breaks the mould, giving coaches the ability to recreate various match situations in training whilst adding unpredictability and developing reaction skills of athletes in all levels of the game. 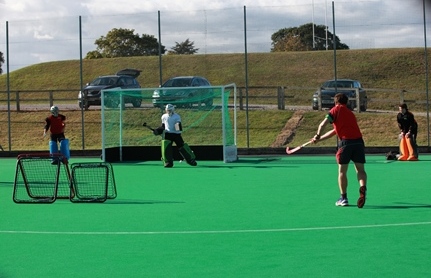 Looking at a Crazy Catch you might be forgiven for not seeing past its use as a goalkeeper training aid. Top goalkeeper coaches worldwide such as Martijn Drijver, Graham Mansell-Grace, John Hurst and Jacques Le Roux to name but a few, have long been incorporating rebound nets into their programs to work on a range of reaction saves and creating unpredictability and chaos. These uses are shown in the recent video with England and GB star Maddie Hinch. The uniqueness of the Crazy Catches is the patented INSANE netting which means the ball pings off the net at very high intensity and the angles are completely randomly. The Crazy Catch adds fun to training and you can see on our You Tube channel just the huge numbers of possibilities in terms of drills.

With the ball increasingly being played in the air in modern hockey, the Crazy Catch enables these 3D skills to be honed. Lifts, Dinks, Aerials, Deflections and volleys are all skills which can be developed by using the Crazy Catch – either on the SANE side for beginners or the INSANE side for the more advanced player. Forwards can improve their stick skills and reactions whilst defenders need to be able to deal with the ball in the air just as effectively so first touch and receiving techniques can also be practiced. We already know that the English champions Beeston are big fans of the product, as well as lots of other National League sides including Loughborough, Bedford and Leicester HC, as well as many top coaches working in the single system and coaching companies.

The Crazy Catch is a product where there are also numerous underlying benefits to its usage. Hand Eye co-ordination is improved as is peripheral eye training known as vision performance, which is formed which formed part of the GB men’s program pre London 2012. It makes perfect sense when you think about it, that the eye is a muscle which can be improved through training… the more of the game you can see the better the odds of making the goal making pass or making that last ditch interception. In other elite sports, we are seeing some great use of the product in terms of speed and agility training and also with injury rehabilitation… All of these elements plus the big fun factor (for kids of all ages!) make Crazy Catch a must have product for hockey clubs.

Crazy Catch is available in 4 sizes (Freestyle, Upstart, Wildchild and Professional) from all leading hockey retailers

DEAL OF THE WEEK
X
Share this ArticleLike this article? Email it to a friend!
Email sent!